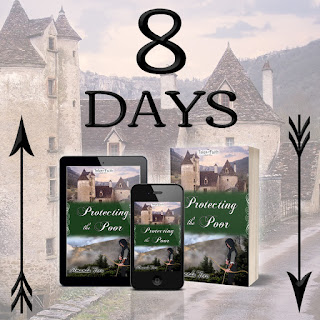 One of the biggest lessons God taught me while writing “Protecting the Poor” is seasons (a lesson I’ve technically “learned” before, but needed a reminder). I had finally finished a full draft after several months’ of hard work… only to put it aside and dive into full-time college work for the first time (I’m considered a “non-traditional student” – aka, old ;) ). In December, I did a brush-up edit (but wasn’t able to fully focus on writing, as I had two siblings get married in December and January), then had to push it aside again for my second semester of school. It wasn’t until May that I finally got to focus on writing. I am totally not used to letting a project rest, but for right now, in this season of life, it’s not a fully-focused writing season. It’s a season to focus on music (my major and job, as I teach). It wasn’t an easy pill to swallow, but it has been a beneficial lesson, realizing that God holds my time in His hands and that He knows exactly when this or that needs to be done. Surrendering my schedule to Him isn’t easy, but it’s needful.

What lesson has God been teaching you lately?