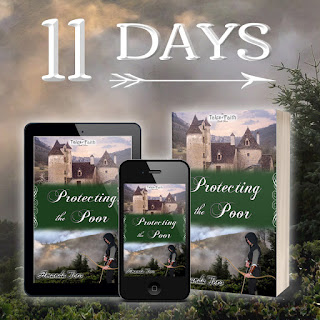 Who else was raised on a bushy-tailed Robin Hood? Yeah… that Disney cartoon… ;) It’s been years since I’ve watched it, but that and Disney Richard Todd movie were the foundation of my Robin Hood knowledge.

In more recent years, I’ve become hooked on BBC’s Robin Hood series (note: I’ve only watched the first two seasons because I’ve heard details of the third season that I didn’t want to watch; added to that, a few episodes in the first two seasons contain details I’ll not plan on re-watching).

Who else has watched any of these? How has your Robin Hood education been?

Cheers for a bushy-tailed Robin Hood! I always liked the Disney cartoon of Robin Hood, although I liked Little John better than Robin Hood. :):)

Never saw Disney's but I watched the tv show on dvd, staring Richard Greene! And I watched the BBC's 1st season and part of the second. I second you on season 3 and the content warning! Robin Hood forever ;)

I watched a TV version years ago on Robin Hood. I enjoyed it.
Marilyn

@ P.K. - haha! What is it about these side characters? ;) Because, even in my story, I tend to like Betin over Dumphey sometimes. ;)

@ Ryana - oh yes, I've seen portions of that one too!! Forgot about it. Richard Greene's is so funny at times! Okay, so in the BBC version... yeah, I can totally get hooked into watching those if I'm not careful. ;)