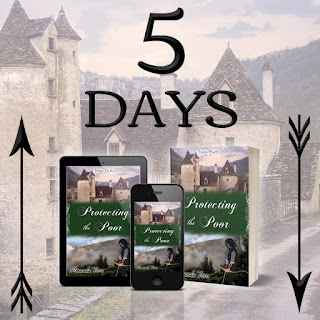 Robin Hood first appeared in historical recordings as early as mid-1300s. Many refer to “Robin Hood and the Monk” (an originally untitled piece) as one of the first ballads of Robin Hood. It is 92 stanzas long, so I’ll just share the first two (read the full ballad here: https://d.lib.rochester.edu/teams/text/robin-hood-and-the-monk)...
In somer, when the shawes be sheyne, And leves be large and long, Hit is full mery in feyre foreste To here the foulys song,

To se the dere draw to the dale, And leve the hilles hee, And shadow hem in the leves grene, Under the grene wode tre.

If your Robin Hood addiction (ahem… fascination) wants to learn more about the tales, ballads, and historical elements, here are some great websites to check out:
https://robinhoodlegend.com/early-ballads/
https://www.history.com/topics/british-history/robin-hood
http://www.mythencyclopedia.com/Pr-Sa/Robin-Hood.html
Posted by Amanda Tero at 5:00 AM
Email ThisBlogThis!Share to TwitterShare to FacebookShare to Pinterest
Labels: Tales of Faith, Writing