Today's retelling author is new-to-me, but her books look so creative and fun! I'm happy to get to know more about her with you!

Meet Rachel...
Born only a few miles from where Jesse James robbed his first train, Rachel Kovaciny has loved westerns all her life.  She says they’re where her imagination feels most at home.  Rachel is a Christian wife and mother who homeschools her children.  In her spare time, she retells fairy tales as westerns and writes a column to the Prairie Times as well as contributing regularly to the online magazine Femnista. 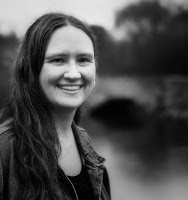 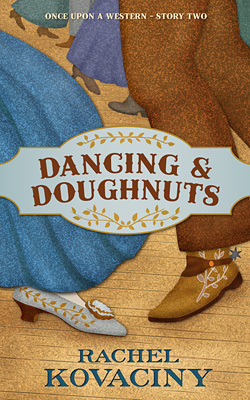 Fifty dollars just for asking a few questions? Jedediah Jones figures it must be his lucky day. What dancing and doughnuts have to do with anything, he neither knows nor cares. He’s only interested in earning that money so he can finally eat something other than the apples he’s been living off for days. Once his stomach and his pockets are filled again, he plans to move on.

But answering the advertisement plunges him into a forest of painted trees, twelve pretty sisters, trouble, and more trouble. And, yes, doughnuts.

Can Jedediah Jones solve the mystery and earn that fifty dollars when the whole town has failed? Or will the twelve sisters lose their family’s business no matter what he does?

Behind the Retellings
A note from Rachel...

Thanks for having me here today!

Somewhere around 2012, I got the idea of retelling fairy tales as westerns, but it stayed just an idea I kicked around a while until 2015, when I decided to enter a contest from Rooglewood Press focused around retellings of “Sleeping Beauty.”  My entry, “The Man on the Buckskin Horse,” was one of five winners which were then published in the anthology Five Magic Spindles in 2016.  Encouraged by that success, I next retold “Little Red Riding Hood” as a western, which became my book Cloaked.  I followed that up with Dancing and Doughnuts, which retells “The Twelve Dancing Princesses.”

That initial idea for retelling a fairy tale as a western was sparked by reading a picture book version of “The Twelve Dancing Princesses” to my small children.  It’s long been one of my absolute favorite fairy tales, and it struck me one day that the former soldier in the fairy tale could easily be translated into a Civil War veteran.  I love the frolicsome feel of this particular story, and tried to capture that in my book.  Although the characters are faced with problems, they’re not in any kind of life-or-death danger, unlike my previous retellings.  That made Dancing and Doughnuts especially fun to write.  I also had a good time trying out many doughnut recipes from the 1800s until I could find one that matched the ones in the book fairly well.  My husband says this is the kind of research he’s especially fond of.

I love studying history, so much so that I kind of accidentally got a history minor when I was in college.  I kept taking history classes for fun whenever I had an empty spot in my class schedule, and I accumulated so many that I qualified for a minor without meaning to.  I also love reading historical fiction because seeing how people lived in times gone by helps me understand and appreciate my own life in new ways.  So writing historical fiction myself is something of an obvious choice.  I truly enjoy things like doing the research to get everyday details correct, studying the history of the west to find the right place to set a story, and checking on the etymology of words so I don’t use a word in a character’s dialog or thoughts that isn’t period-correct.  Those might be boring for another writer, but for me, they’re a joy.

I’ve loved western movies since I was a toddler myself – I grew up watching the westerns of John Wayne and James Stewart and their contemporaries.  I also very much enjoyed what I called “cowboy books” when I was a kid, and I want to bring that same pleasure to today’s readers.  I think that fairy tales and westerns are a natural fit for each other because westerns are America’s mythology.

My books do not have to be read in a particular order because they don’t tell one continuous story the way some book series do.  Instead, I call Once Upon a Western an anthology series because each book stands on its own, but they all take place in a shared universe.  The characters from these first two books may show up again in later books in some capacity.  And I’m gradually writing and releasing short stories that expand the universe and will eventually help to connect the novels more too.  So far, I’ve released two, which are available for free for Kindle, Nook, and Kobo.  “No Match for a Good Story” is based on the story of Scheherezade and is a follow-up to “The Man on the Buckskin Horse,” and “Blizzard at Three Bears Lake” retells “Goldilocks and the Three Bears” and is a follow-up to Cloaked.  This month, I’m releasing a new short story called “Gruff” that also follows Cloaked.  I think you can probably guess what fairy tale it revolves around.

I’m currently retelling “Snow White and the Seven Dwarfs” as a western called One Bad Apple.  It features seven white orphans who get taken in by a wagon train of former slaves, only to discover that one member of that wagon train is a very dangerous woman with deadly intentions toward her stepdaughter.  I’m in the process of revising One Bad Apple, and it should be released in early 2020.

Posted by Amanda Tero at 9:45 AM
Email ThisBlogThis!Share to TwitterShare to FacebookShare to Pinterest
Labels: Retellings

Thanks for including me in this series, Amanda!

This looks interesting. Twelve Dancing Princesses is my favorite fairytale!

I haven't heard of this one before. Adding it to my TBR!