Today, we have Hope Ann visiting with her 12 Dancing Princesses retelling!

Hope Ann uses chocolate to bribe a wide ring of spies, from the realm leapers of Aslaria to the double agents of Elkbend, for their stories. Based in Indiana, she is the self-published author of the Legends of Light series, a personal writing coach, and writes the Story Embers newsletters. You can find out more about her at authorhopeann.com 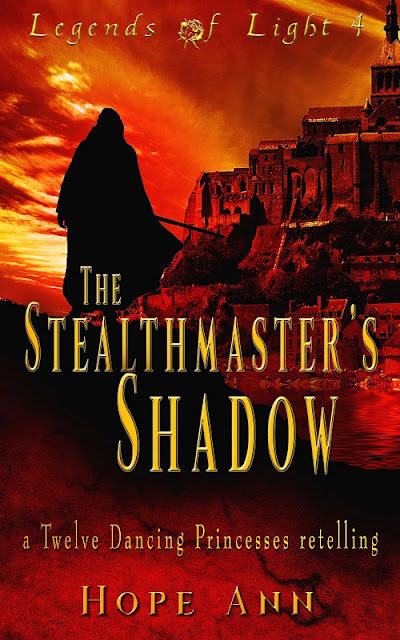 It’s been ten confounded years since the war ended.Verus, a retired soldier, determines to enforce the peace the victory ought to have brought. His wanderings bring him to the city of Nerva, a sprawling riverside chaos no other Stealthmaster will touch.Commandeering the task of a former comrade, Verus presents himself to the governor and promises to search out hidden Subverters. The true reason for his actions he keeps to himself. After all, the tyrannical governor will hardly approve of lending aid to those pitted against him, but the Subverters need information. Maybe even weapons.The wishes of the Subverters themselves are immaterial. They weren’t there during the war. They didn’t see the horrors Tauscher spread.Verus has.So has the new ambassador from Zahavia who strides through the great doors of the feasting hall, bringing Verus face to face with nightmares from his past.As the simple mission dissolves into confusion, Verus struggles to help those he’s plunged into danger, from a serving lad to the infuriating woman he’s taken to calling “Princess.” Fleeing will only make the enemy stronger. But staying…Staying could doom them all.Perfect for those who love fantasy but don’t have the time to sit down for a full-length novel, the fourth novella in the Legends of Light series presents the story of the Twelve Dancing Princesses in a clean, exciting, and inspiring manner. Full of wit, secrets, danger, and distant threats looming on the horizon, this is more than the mere retelling of a favorite fairy tale.A stand-alone story, The Stealthmaster’s Shadow focuses on the fourth fruit of the Spirit, long-suffering, while following the results of the war between the Prince and Tauscher. 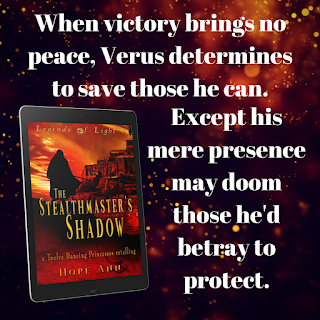 
Verus is one of the most sarcastic and dramatic characters I’ve written, and perhaps one of my favorite character to write. Though his story, The Stealthmaster’s Shadow is written in third person, almost everyone I talk to remembers him in first person. I even remember him in first person most of the time because his voice is so strong.

He was a relief to write in more ways than one. I’d attempted a contest with a Snow White retelling directly before his story and it failed. Miserably. I couldn’t connect with the voice or characters. So when it came time to write Legends of Light 4,  I wondered if I could still, well, write.

The Stealthmaster’s Shadow, a retelling of the twelve dancing princesses, is probably my favorite Legends of Light novella so far. Each story is separate, standing alone from plot-wise. It’s the history that carries over from book to book, not the characters.
Verus is a soldier from the ‘confounded war’ that ended ten years ago. He served the Prince. They won.

And the world went on as normal. There’s still pain. There’s still sorrow. And Verus, hiding scars of his own, intends to do what the Prince failed to do and set things right.

In his own way, of course.

Verus didn’t glance back even though at least half a dozen guards must be spilling into the room.
The tavern master’s arm tightened around Eolus. “If it had been any other…” His glare flitted past Verus. “But Diomed is under Governor Osvaldus’s protection and orders.” He broke off.
Verus’s lips pressed tight. Right. If anyone was hunting innocents, it would be Diomed. Shadows edged Verus’s sight as men closed in warily, weapons drawn.Verus pivoted. “Good evening, gentlemen.”The captain of the guard hesitated, one hand resting on the pommel of his sword. His gaze flitted from the chain on Verus’s shoulder to the one in his hand, then to the figure prone on the floor. “We… Stealthmaster, sir. The governor—”“Yes, yes.” Verus held up one hand. “I need to see him too. Half a moment, if you would.”

When I set about to write a twelve dancing princess retelling, the character who fascinated me the most was the man who finally took up the challenge to follow the princesses and watched them dancing each night.

While there’s very little to dance about in this version of the story, Verus shifted into a dynamic character well able to follow anyone who tried to hide.

Of course, this meant he got himself into all kinds of trouble.

“You think all trouble revolves around a group of Subverters?” Osvaldus advanced a step. “If you can’t read the meaning of a locked door—”“It wasn’t locked,” Verus said. “There was merely an obstruction to opening it. A fault I fixed. Without charge, I might add.”The governor’s fist clenched. “Get out.” He splayed the fingers of his other hand against Verus’s chest. “Now!”Verus twisted to the side, shoving the man’s hand off. A flush burned behind his ears. “There’s more than you’re telling me, Governor. You will give me the information I need or you will release me from this contract. I await your pleasure.”“Lift a dagger against me, and it will end up in your chest faster than the north wind itself.”
“Is that what you think?” Verus clenched it tighter. “You’ve given me a task. There’s no need to torture men for information you’ve hired me to find.”

The question Verus has to decide is if those he’s been sent to find are actually worthy of being hunted. And if they aren’t, is betraying them the step needed to open their eyes to danger and force them to safety?

There’s no easy answer. With nightmares from his past closing in around him, Verus’s mere presence may doom those he’s come to care about, regardless of his actions. But the one thing he learned from the war was to depend on no one.

He’s not about to start now when the stakes are so high.

While Verus is completely opposite me in character (ESFJ while I’m an INTJ) working with him did more than explore the problem of pain and sorrow. It helped me delve back into writing and fall in love with characters again. Even the crazy insane ones who are nothing like me.

Posted by Amanda Tero at 5:00 AM
Email ThisBlogThis!Share to TwitterShare to FacebookShare to Pinterest
Labels: Guest Posts, Retellings

Thank you so much for having me on your blog!