Out of a Rut

Last week was a complete non-writing week for me. I'm not complaining, because in that week, I was able to focus some much-needed time on WAJN projects (Christmas CD coming soon, Lord willing!!). The primary reason I didn't spend the week writing, though, was because I wasn't exactly sure what to do next (you may remember the article I wrote about that).

Yesterday, I spent a little time walking and praying--specifically focusing on my writing projects. You see, my original plans were that, while Book One of Nat is in the hands of beta-readers, I would write as much of Book Two as I could. That way, hopefully it won't take as long as Nat's story took.

The more I thought of it, though, the less comfortable I felt about that idea. There are still a few glitches in Nat's story that I know need to be worked out before I begin writing book two. Yet, I still wanted to get the plot down for book two. I did a little brainstorming on it last week, but the well was d.r.y.

Back to my walk. As I walked and prayed about it--praying for ideas, for direction, for anything, the Lord gave me that light bulb (i.e. "DUH") moment: work on something else.

After all, whose schedule was I following? Mine? My readers'? God's? 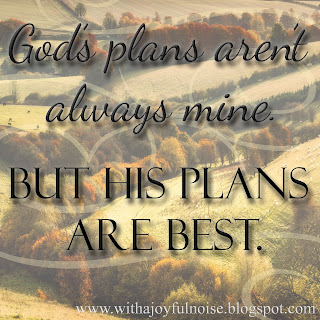 The instant the thought crossed my mind, I felt greatly relieved. That was my answer. And now that I knew, my writing life seemed pretty simple. After all, there's this other story I've been yearning to write, but so far, the timing of when to write it hadn't happened. I began mulling over this idea, praying about it (I had the general gist and location, but the plot just wasn't there yet). Within an hour, the Lord provided a rough synopsis of the entire story--climax and everything! This usually doesn't happen, so you can imagine how excited I've been! I'm ready to climb out of my little writing hole and race across the field of ideas, picking bouquets of words and tying them together with ribbon-like themes. My desire is to have this rough draft completed by the time I get Nat back from beta readers. But, God's plans aren't always mine, so we shall see.

What excitement has happened in your life lately?
What do you do when you're in a rut (whether in life or in writing)?

Posted by Amanda Tero at 5:00 AM
Email ThisBlogThis!Share to TwitterShare to FacebookShare to Pinterest
Labels: Writing

Great post! I'm working on outlining the 5th book in my Civil War series right now, even though I don't have 3 and 4 completely finished. But I need to have the ending figured out completely before I can wrap up some holes in those two...if that makes since, haha!

My dad and I are at Ambassador Baptist College this week, representing FBN Radio at their Missions Conference. Please pray for safety as the meeting is a nearly 2 hour trip one way!

When I get in a rut, I normally take a break, either from that project or from writing completely, and reevaluate. Why am I writing? Is my focus still on God's glory or have I strayed into adventures? If the latter is the case, I adjust my sights and try harder to focus on my "missions statement":(Jude 22) and remember, it's not about me, it's about Him.

How exciting! Isn't it so wonderful when God provides it all and you have peace about something? Then you KnOw it's from God. Exciting this week...well, God's been providing a lot of art opportunities for me, opening new doors which is exciting.
When I'm in a rut...hmm. If it's writing, sometimes I have to just make myself pick it up and just start writing. Other times I put it the story down, whichever one it is, and pick up another story, or move on to some other hobby like music or art for a while. Life ruts are difficult. If it's something like getting behind in my homework, I have to evaluate what the problem is--usually it's getting to bed too late and then waking up too late when I work best in the morning. In that case, I have to MAKE myself go to bed at the time I know I need to, in order to wake up on time the next morning. Or I plan my day better, and give myself a schedule to work from and goals to aim for.

I'm so glad that God showed you what to do next, and I'll be praying that He pulls all the pieces together quickly and smoothly!

@ Ryana - yes, that makes complete sense! As I'm writing more series, I'm figuring out HOW to do it. You DO need to have a picture of the ending! ;) I know I'm late in replying, but I was praying for you! <3 Amen, good points.

@ Jewels - Yes, so true!!! It is interesting how different ruts have to be treated differently. :) A lot to be said about "Making" oneself do something! Thanks for the prayers! <3