I'm writing again! I know that seems funny to say, because to some people, it probably looks like I write all of the time. However, I'm in the middle of a busy season -- my oldest brother is getting married in less than two weeks, Lord willing! And, we are finishing out bedrooms upstairs so we can rearrange bedrooms.

Anyway, I was able to do some writing in the car over the weekend (8-hour round trip) and in that time, the Lord helped me to reach a "moving forward" point in "The Secret Slippers" rewrite. Then, I had time yesterday to actually sit down and WRITE (not just "try to get a few words as I am taking a break from something."). I am now excitedly eager to see the end of Raoul's journey. I have rewritten up to the point I had, but the story has to go further... I'm not 100% sure what to do there. Praying for answers! Then, I have to go through Lia's part (which, I'm hoping and praying is just editing and tweaking, not a full rewrite like Raoul's). 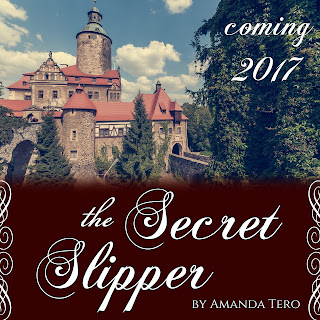 Here's an excerpt from Chapter 19... I can't give too much, cause I don't want to give away any important information. ;)

The wind blew in short puffs, threading its invisible fingers through Raoul's hair as he walked through the center of town, where Jolin and Gale had agreed to meet him. Though he knew it was unlikely that Ellia was in the crowded streets, he couldn’t keep from observing each lass’ gait. They all skipped or steadily walked as they did their tasks. Which was a good thing, unless one was looking for a lass who was unable to do either.


How was your weekend? Did you get to do any projects you were looking forward to doing?
Posted by Amanda Tero at 5:30 AM
Email ThisBlogThis!Share to TwitterShare to FacebookShare to Pinterest
Labels: Writing

Can't wait to read the book!! It sounds exciting.

Do you ever get writers block? And can you ever not find the right ending to a story? If so, what do you do?

I would say that yes, I do get writers' block. I pray through it, "force" myself to write 100 words a day, and then read good books. All of that sometimes helps me to get beyond it.

As for not finding the right ending... so far that hasn't happened. Usually, when I get to finding the ending, I pray a lot about it. And then, I may ask some friends' opinions and suggestions. I do a lot of thinking, a lot of "what ifs." So far, God has always led me to the right ending. :)

Ooo. I am excited!
R Franklin