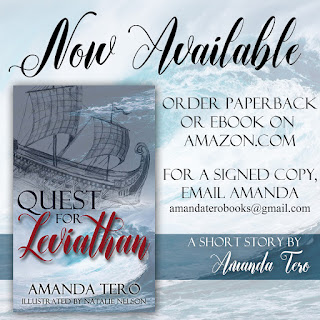 The whole writing process never ceases to amaze me. One would think that, for a short story, there's nothing extra exciting about "Quest for Leviathan." But for me, it holds a powerful punch of excitement!

First... God has seen it through! I had moments of doubt as I tried writing this that it was a story I was supposed to tell. But, it was done all in His timing (more on that later) and, as with each of my publications, He has guided me and led me to do more than I thought imaginable.

Second... the idea was one that came to me while reading my Bible. Those are always fun! I thought it would be an easy-to-write idea (I mean, Leviathan! Come on!!!!). Instead, it took me the span of a few months to get beyond the first few paragraphs. I knew where I wanted to go, I knew the message God had given me for the story, but it just wasn't coming together. Lots of prayer and patience went into this project!

Third... the timing was completely in God's hands. As I mentioned above, "Quest for Leviathan" wasn't a weekend project. But then and again, had I released it in the fall, I just might not have had Natalie illustrate it for me--as it wasn't until much later that I decided I wanted to try some illustrations this go-round. There are many other exciting things related to "Quest for Leviathan's" release (some of which I'm not at liberty to share yet) that are all happening because it's a June release, and not a fall 2017 release.

Fourth... all of you have been so excited and supportive of my little story. For an author, that means the world (and I truly mean it). Unless you're an author, you might not know just HOW MUCH it means to have others read your work, share about your work, and encourage you in so many ways! Thank you all to everyone who has made this such an exciting release to me!


Leviathan took the life of his father.

Anath has spent three years preparing for the voyage that will end the threat of Leviathan. Yet as the Valor launches into the depths of the Mediterranean, an inward quest also begins, taking Anath to depths he is not willing to face.


Purchase an e-copy on Amazon or order a paperback.


If you would like a signed copy, email me at amandaterobooks@gmail.com
Add to your Goodreads shelf. 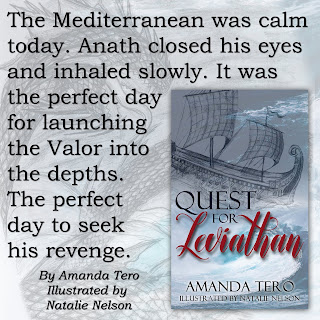 GIVEAWAY!
I am giving away TWO print copies of "Quest for Leviathan" to one winner -- one for you, and one for your friend! 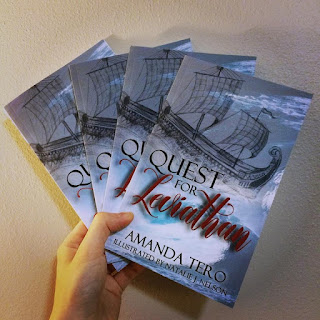 BLOG TOUR
A shout-out to these lovely people who are helping spread the news of "Quest for Leviathan!" The bloggers are doing a diversity of things, so be sure to check them all out!

Posted by Amanda Tero at 5:00 AM
Email ThisBlogThis!Share to TwitterShare to FacebookShare to Pinterest
Labels: Personal, Quest for Leviathan, Writing

A quick question, is the giveaway for internationals too? :)

I just read your book and am about to go review it on Amazon! Thank you so much for the opportunity to win a paperback copy. :) That was a really good story.

Sounds like a great book! Congratulations, Amanda, on this new release!

I'm so excited for you! Leviathan has always fainted me! Can't wait for my turn to post!

@ Rosalyn - wow, I completely skipped out on the international giveaway section. :P This is just for USA, as shipping would be crazy otherwise (even to Canada). So sorry!

@ Ashley - thank you so much! I'm glad you enjoyed it!

@ Ryana - thanks! :) I really appreciate it, and look forward to your post!!