Once again, I'm happy to be a part of a fellow-author's blog tour! I have read a few of Sarah's books and enjoyed her new release, Kate's Innocence. 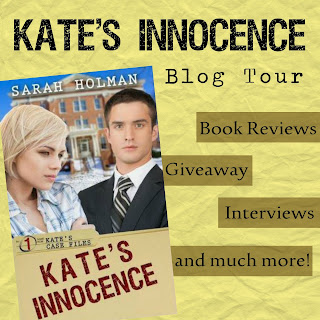 ABOUT THE BOOK
What would you do if you were accused of a crime you didn’t commit?

Kate watched as her campus was torn apart by bombs and now is being accused of perpetrating the crime. As the evidence quickly stacks up against her, she begins to lose hope that the truth will come to light. Even though the handsome FBI Agent, Patrick, has taken up her cause, will they be able to prove her innocence? Will God, who she neglected for so long, listen to her prayers for help?

Patrick is an agent with a very special team of agents. He wants to help Kate prove she is innocent, but as each new piece of evidence is revealed, that goal seems harder. He wonders why he feels so compelled to help her and so sure she is innocent despite the evidence. Will he be willing to put his job on the line to help her? Can he trust in God to make sure the truth will come out in the end?

A brilliant college student who claims her project was to disarm bombs is now prime suspect for her college's bombing. Kate Mayfield finds herself in a sticky situation as she strives to prove her innocence with the FBI team who is investigating her. As evidence stacks up against her, can she prove her innocence? Will anyone believe in her?
Kate was a very unique MC--one that I honestly wasn't sure that I would like: A military kid turned soldier herself then brilliant college student and primary suspect with sass. As the story progressed, though, I got to enjoy Kate, then became attached to her. Since I read this story over a period of days (by schedule demands--not choice!), my thoughts often drifted to Kate and where I had last left her. This being the first book in the series, it gave a hint of how the trials she was facing led Kate to consider her relationship with God and how much she had neglected Him. I am interested in seeing how this spiritual plot progresses in upcoming books.And then there's Patrick--about half of the story told from his perspective. He seemed a little bit "too good to be true" of a guy MC yet is a character that the reader is supposed to love.The other agents on the FBI team were fun as well and all like-able in their different ways. I'll admit, I fell in love with all of them!Though mystery in subject, this book was not suspenseful nor did it have any dark scenes (in my opinion). The only thing that would keep me from handing it to a young teen would be if they got scared about the thought of people hiding behind doors and in rooms to threaten them.About romance...two hugs were mentioned, but nothing super romantic. One, the young man was encouraging Kate. The other, was a little more about their feelings for each other. I'm guessing there will be more romance between the two as the series progresses, but there is not much in this first book.I will definitely be in line for reading future books in this series!*I received a copy of this book from the author for my honest review*

Sarah Holman is a not so typical mid-twenties girl: A homeschool graduate, sister to six awesome siblings, and author of three published books and counting. If there is anything adventuresome about her life, it is because she serves a God with a destiny bigger than anything she could have imagined. 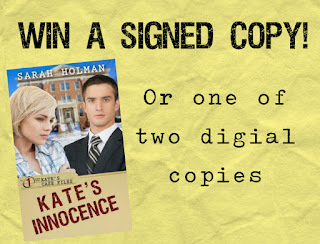 a Rafflecopter giveaway
Posted by Amanda Tero at 6:00 AM
Email ThisBlogThis!Share to TwitterShare to FacebookShare to Pinterest
Labels: Book Reviews

Congratulations on your latest book. How long does it take you to complete a book?
Marilyn

It takes me about a year or two from the time I write a book and the time it is available to my readers.
Sarah