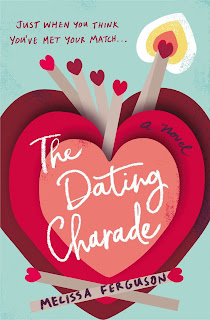 This was not at all what I judged it to be… which means I was pleasantly surprised. I love comedy, but I’m not the biggest romance fan, so yes, I realize when I sign up to read a rom-com, I might get more romance than I bargained for. But this was totally not the case. There was a lot of heart-wrenching depth to this story as foster care was a very big thread woven throughout the story.

The Dating Charade is a hilarious yet deep read. I cannot even count the times I actually laughed out loud while reading it. It was just the read I needed.

The romance was actually not the main focal point of the story, which I personally liked. It was there and it was something the characters were concerned about, but there really weren’t many uncomfortable scenes. Okay, there was one, but it wasn’t between the two MCs… yeah, it was really an unnecessary scene in my eyes, [spoiler] as it involved Jett interrupted while in the bathroom and the whole scene was basically him undressed and seen by another woman [end of spoiler]. Yeah, that scene could have totally, totally been left out, as it showed the chaos, but I think a much more G-rated situation could have occurred. Besides that, I don’t remember anything specifically, but then I will openly confess that I was more involved in the kids’ stories than in their romance.

Definitely a 4.5 star-book in my books. ;) I’ll probably find time to reread it.

Cassie Everson is an expert at escaping bad first dates. And, after years of meeting, greeting, and running from the men who try to woo her, Cassie is almost ready to retire her hopes for a husband—and children—altogether.
But fate has other plans, and Cassie’s online dating profile catches the eye of firefighter Jett Bentley. In Jett’s memory, Cassie Everson is the unreachable girl-of-legend from their high school days. Nervously, he messages her, setting off a chain of events that forces a reluctant Cassie back into the dating game.
No one is more surprised than Cassie when her first date with Jett is a knockout. But when they both go home and find three children dropped in their laps—each—they independently decide to do the right and mature thing: hide the kids from each other while sorting it all out. What could go wrong?
Melissa Ferguson’s hilarious and warmhearted debut reminds us that love can come in very small packages—and that sometimes our best-laid plans aren’t nearly as rewarding and fun as the surprises that come our way.
Click here to get your copy!

Melissa Ferguson lives in Bristol, Tennessee, where she is an adjunct professor at King University and pens books that make her laugh and grow. She used to have hobbies like running and backpacking the Appalachian Trail outside her door. Now she and her husband are outnumbered, and her hobbies include diaper changes, chasing toddlers in parking lots, and admiring the Appalachian Trail out her minivan window while singing “Winnie the Pooh.” She survives by Jesus, rom coms, and roughly two espresso shots a day. The Dating Charade is her first novel.

Read an excerpt of The Dating Charade here.

Posted by Amanda Tero at 5:00 AM
Email ThisBlogThis!Share to TwitterShare to FacebookShare to Pinterest
Labels: Book Reviews