In the Cradle Lies | Book Review and Giveaway

On a solo ski vacation in Canyon Mines, Colorado, Tucker has a love-hate relationship with his wealth, spending indiscriminately while skiing fearlessly and preparing to conquer the overgrown slope of Hidden Run, a dangerous run not attempted in decades. As genealogist Jillian tries to uncover enough of Tucker’s family tree to understand his charming nature but reckless resolve, Jillian’s equally charming father, Nolan, cajoles Tucker into giving him ski lessons to get him talking about the suspicious circumstances surrounding his grandfather’s life in St. Louis in the 1930s.
On the surface, Tucker’s family’s history seems too perfect. The secret may lie in the sealed envelope Tucker carries with him at all times—even on the ski slope. When no one can find Tucker to tell him the fiancée he never mentioned turned up in Canyon Mines, they realize he must be off attempting to ski Hidden Run alone in a snowstorm. And they may be too late.
In the Cradle Lies is the second book in the Tree of Life series by Olivia Newport. You’ll want to return to the lovely Colorado mountain town of Canyon Mines again and again to explore and celebrate unforgettable family stories that will inspire you to connect with your own family histories and unique faith journeys.
Click here to get your copy!


Wow, wow, wow. I don’t give five stars freely or often (well, more like 4.5 stars, explained later), but I do feel like this book deserves it. Many of the books I’ve read this year have been fast-paced suspense that rely on nail-biting situations to pull the tension. This book is slower-paced, but it is dripping with rich backstory and family history—the fascination of it all requires a slower pace and somehow weaves incredible tension throughout almost the entire book.

Jillian is a genealogist, her father Nolan a lawyer, and their Canyon Mines friends shop and inn owners. It’s really an idyllic town with good Christmas vibes (even though it is not a Christmas story). Though overall it was a serious story, there were a couple of times I actually laughed at Jillian and her dad’s back-and-forth.

And then there is Tucker. Brash, rich, likeable, and unpredictable Tucker with a family history is woven creatively through the entire story—pieces of information leaked out in just the perfect amount to make you want to keep reading until everything clicks into one detailed picture. Not a beautiful picture, but a realistic, mind-boggling picture.

I could go on and on about the storyline, but I really don’t want to give absolutely any spoilers. You have to experience the whole story—and backstory—for yourself.

I realized after I finished and loved this book that there really isn’t romance. There is some sideline romance, but nothing too sticky or unacceptable. Without giving spoilers, I really admired how the whole romance situation was handled.

The weakest points in this book for me would be the spiritual plot and then Nolan’s and Patrick’s story. It wasn’t that Nolan’s and Patrick’s story was especially weak, I just think it could have been… maybe written where I could more easily identify with their family struggles (as it was, I had to make myself realize how impactful the reason of their argument was). And the spiritual plot… John 8:32 was the backbone of the book, but it was kind of used out of context. Not once did it mention the reason for this freedom is about Jesus Christ and His salvation setting you free. Rather, she used the angle that knowing the truth about your family will set you free. I do think there is some truth in that, but that is not what the Scripture is implying at all. And, as that was the general spiritual emphasis woven in the book, it was a little weak. The characters went to church, mentioned praying and the Holy Spirit leading, but honestly, the story could have stood up well with this removed. So, because of the lack of spiritual depth, it’s more of a 4.5 read for me.

Now for all of the other books to come out…!

Olivia Newport’s novels twist through time to find where faith and passions meet. Her husband and twenty something children provide welcome distraction from the people stomping through her head on their way into her books. She chases joy in stunning Colorado at the foot of Pikes Peak. 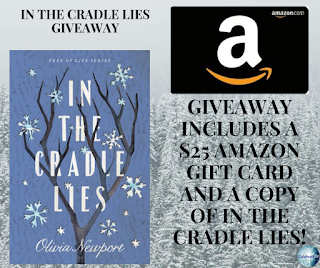 To celebrate her tour, Olivia is giving away the grand prize package of a $25 Amazon Gift Card and a free copy of In the Cradle Lies!!
Be sure to comment on the blog stops for nine extra entries into the giveaway! Click the link below to enter.
https://promosimple.com/ps/f1ba/in-the-cradle-lies-celebration-tour-giveaway

True confession. I live in Colorado and don’t ski.
In the Cradle Lies includes several references to “How can you live in the Colorado mountains and not ski?” Jillian, a main character in the Tree of Life series, has lived in the mountain town of Canyon Mines since she was two, and by the time she was eight she knew she didn’t want to ski.
I grew up in Illinois, and while my high school had a ski club and somehow found places to ski (I’m not sure where; um, not exactly mountain territory), I was sure I would break something. Arriving in Colorado in my forties did not persuade me to take up skiing at that age. I live at the base of Pikes Peak, not in the mountains like Jillian. I do love the views!
But one of the fun things about being a writer is learning a lot about things you know little about. Enter Google and YouTube. And more YouTube. And … you get the drift.
Some quick facts about Colorado skiing to help get you in the mood for In the Cradle Lies:
I hope you’ll check out In the Cradle Lies—and find out why Tucker came from St. Louis to Canyon Mines to ski an abandoned run that put his life at risk.

The ski facts at the end of the post were great.

I liked the review.

I really enjoyed this book, and seeing the two storylines come together.

Really looking forward to reading this one!

@ Debbie - I really enjoyed it, and hope you get to read it!

@ Emma - yes! How she wove in the two storylines was fantastic!