Journey to Love is now ready for you! Find it on Amazon!

Now orphaned, Marie is swept miles away from the only life she knew to be sheltered by unknown guardians. Caught in the challenges of a new life, she cannot prevent changes from happening, but she can keep the Bowles and their friends at arm's length. Or can she?

While things appear to transition smoothly on the outside, Marie struggles against the turmoil she faces on the inside. She sees something in the Bowles and her new friends that she had never experienced before...but should she trust what the preacher is teaching when it goes against everything she had accepted as truth? Is God really a God of love? If He is, then is Marie willing to accept it?

Follow Marie as she begins the journey to love.

Imagine yourself as an orphan, struggling for survival on the filthy New York streets, where disease and crime run rampant. Journey from these wretched streets to a temporary lodging in an overcrowded orphanage and then to the train station. After riding the train for hours, picture yourself lining up with other children, waiting as adults look you over. Would you be chosen—or would you have to hold onto the hope that maybe, at the next station, someone would want to bring you home? Minister Charles Loring Brace had a vision for New York orphans that brought them through this journey from streets to homes. He began his orphan work in 1853, then in 1854, because of lack of orphanage space, Brace sent the first orphans, by train, to Dowagiac, Michigan, where the children could be sheltered by local families. The "orphan train" continued until 1929, bringing at least 150,000 children to new homes where they were fostered and, occasionally, adopted. Brace desired to place children in good, Protestant homes. Many orphans experienced Brace's desire, but some orphans had different stories: siblings were separated, and some couples took orphans to use for cheap labor. Though many orphans ended up as successful men and women, not all of them turned out to be trustworthy citizens. Orphan Journeys is a fictional novella series based on the American Orphan Train saga. Each story follows orphans not only as they adjust to a new life, but also as they embark upon a spiritual journey. 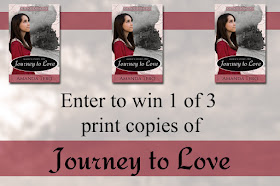 Blog Tour Schedule
Be sure to check out these sweet people who are featuring Journey to Love on their blogs:

Thank you for stopping by! I pray that you have found something that encourages you today. Thank you for taking the time to give me a little comment - they always brighten my day. :) I usually stop by and reply to as many comments as I can, but sometimes it takes me a week or so. But if you asked a question, be sure to check back!

Let the words of my mouth, and the meditation of my heart, be acceptable in thy sight, O LORD, my strength, and my redeemer. (Psalm 19:14)